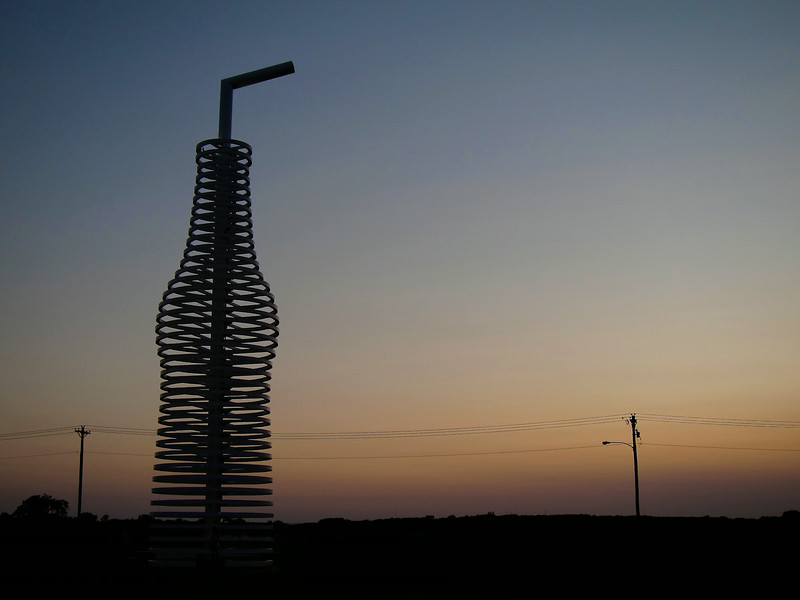 From the Archives: Oklahoma Road Trip

Recently I put a healthy 1,820 miles on my car and experienced 3 US states in the space of 7 days.

This being the longest road trip that I've ever experienced, I figured that now would be the best time to dust off my Nikon FE2 and throw in some film. Coming along for the ride was my Canon S95 digital compact. Setting off from the little town of Rockton, IL, the plan was to reach Oklahoma City, OK by travelling through Illinois, Missouri and finally Oklahoma.

Aside from an endless strip of asphalt moving beneath our wheels and countless fields of corn on either side, not much was to be seen on our travels around Illinois. Nothing to report. The various local radio stations came and went, with a startling number deciding to play Styx's Come Sail Away. We took this as a good sign.

Missouri, home of the nefarious bandit Jesse James, had some beautiful countryside, with rocks and trees that made a pleasant change to the familiarity of endless cornfields.On my father-in-law's advice ("See the real America!") we left the comfortable interstate and took a detour that could only be described as ominous, through the Mark Twain National Forest. We'd have stopped and had a picnic had it not been for the massive gypsy moths all over the place. We sheepishly wound our way back to the interstate and found a motel to stay for the night.

We reached Oklahoma city with no problems. My wife and I met up with her friends and good times were had by all. Well, as much fun as you can have when the outside temperature is 110ºF (43ºC) every day!Such as it was, we spent our time appreciating the invention of air conditioning and watching films. We visited a friend's house to watch Paranormal Activity 1 and 2, went to the Oklahoma City Museum of Art to watch World on a Wire and visited Oklahoma City's historic Bricktown district, before realising that it was too hot outside and hiding in the cinema to watch the lacklustre 30 Minutes or Less. I have no photographic records of these films, but I can assure you that in actuality they were shown, and do exist (sadly so in the case of 30 Minutes).

A high point of the trip was a visit to Pop's on the historic US Route 66. If you ever find yourself in Arcadia, Oklahoma I'd recommend a visit. They sell all kinds of soft drinks from all over the world, and will gladly add ice cream to them in their café. You can get petroleum there as well, although that only comes in two flavours, both poisonous.So that was that. We said our goodbyes to some lovely people and headed back, taking the interstate the entire way. In Missouri we stopped at the Meramec Caverns, and bought tickets for the guided tour.

I'll leave you with a photograph from the final part of the tour. After they lit this one up, they had a light show to the tune of "God Bless America" and even projected an American flag onto this beautiful rock formation, completely undermining any sense of awe and natural wonder you may or may not have had. God bless America, God save the Queen, and all that.

On the way back Styx was usurped by Cyndi Lauper's Girls Just Want to Have Fun. After the third time hearing it, we turned the radio off for the rest of the trip.